I know I’m about a week behind, dear readers. By all rights, you should be reading about Week 4’s veggies right now, and you are not. I apologize. You deserve a more dedicated blogger. Unfortunately, you’re stuck with me. On to the veggies, shall we? 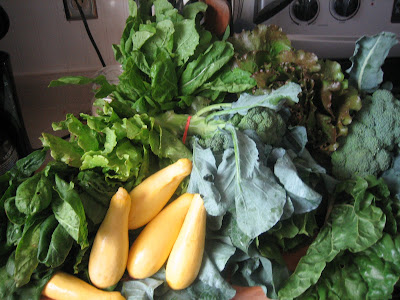 First up was the chard. I don’t think I could ever get sick of chard, but talk to me after another few weeks of getting sackfuls of green leafage. A couple years back, Joan, who runs One Straw, taught me the easiest way to cook greens: Boil some water for pasta. Throw the pasta and your washed, chopped greens into the pot. Cook like you would pasta all by itself. As the nutrients cook out of the greens, they’re absorbed by the pasta! While the chard and pasta were merrily cooking away, I sautéed some garlic, onion, and a wayward red pepper from my in-laws. I tossed everything together, and the resulting pasta dish was a simple, flavorful delight. 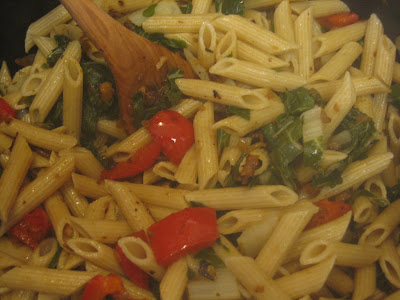 Yellow squash! I didn’t get creative in the slightest with these: They went straight into 30-Minute Vegan’s Zucchini-Corn Fritters, which became yellow-squash fritters. You guys, can I tell you a secret? No more fritters. They always sound like such a good idea, but by the end, Red and I are hot and tired and the kitchen is full of smoke no matter which skillet we use, and my purse smells like a deep fryer for the rest of the week. So, yes, we made fritters, but I wouldn’t hold my breath for more.

I similarly punked out with the collards, stir-frying them with a bunch of garlic and ginger. Their stems are hella tough, so watch out. They looked nice with the fritters, though! 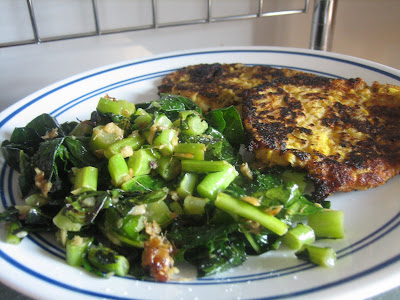 Time for Salad #1, a lovely Greek creation from 30-Minute Vegan. This was really good! We skipped the tofu feta, because that sounded ghetto and like more work than I wanted to do. Therefore, Red did everything! He expertly chopped our romaine and red-leaf lettuce, sliced some tasty peppers, and did all that other salad-related nonsense. No pictures, because I was lazy, but it looked like a Greek salad. Use your imaginations.

The spinach and arugula went into what may have been the week’s crowning glory, a frittata from Vegan Brunch. Isn’t it beautiful? I was worried because Twin Oaks tofu seems to be on permanent hiatus at our hippie grocery, and because I once tried to make a tofu frittata, many years ago, and it was not a success. This one was a success, and I thank my parents for the handmade pie plate in which it so happily baked. DELICIOUS. 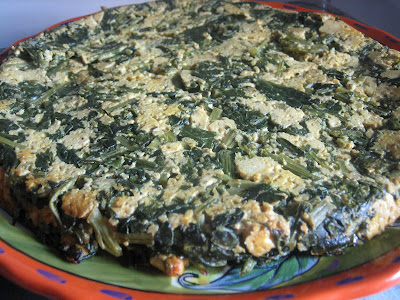 Salad #2 is actually still in existence, because we made it this weekend. Yes, we let the green-leaf lettuce sit in the fridge for a solid week, and then we got more lettuce (of course), and what the fuck were we going to do with all that lettuce? Make a big-ass salad for a 4th of July barbecue, that’s what. 30-Minute Vegan came through yet again, with a nice Mexican salad with black beans and a carob mole dressing. Our dressing was sans mole, because you know how I feel about carob. We also got some spring onions, which were a nice addition. Non-CSA veggies included avocado (so not local) and green peppers. Everyone at the cookout seemed to like it, but I am dismayed at how soggy it’s gotten in the two days since. No matter how much Red and I love salad (and we don’t love it nearly as much as people seem to think vegans should), we couldn’t keep up with it. It might not live to see anything more exciting than the compost bin.

That was the saddest CSA recap ever, wasn’t it? I’m sorry, darlings. I’ll try to do better with Week 4.

Speaking of, posting might be a little sporadic for a while, because your dear Burnout has gotten herself a new job. I start tomorrow, and I will be way busier than I am now. I’m also scared to death, but I hope I’m a little harder to kill than I give myself credit for.
Posted by Vegan Burnout at 2:04 PM 4 comments:

Salon has an interesting piece today: “Men eat meat, women eat chocolate: How food gets gendered.” I encourage you to read it, then bring your love back here and talk about it with me. We already know what the headline points out: Certain foods are considered masculine (mmmmm, animal carcass), while others are feminine (gimme that candy bar, I’m PMSing). Of course, the heavy hand of marketing is everywhere we look, but what really captured my interest was this little factoid: In other countries, food is rarely gendered this way.

Call me a silly American, but I hadn’t ever really thought about that. The author, Riddhi Shah, points out that in Spain, men and women love chocolate equally, while in Egypt, no one really cares about chocolate at all, preferring salty snacks. (Egypt: Feel free to send me your chocolate.) In the UK, boys go for the sweet stuff, while girls are more partial to fruits and veggies. Come to think of it, our house is pretty much the same way. Red has a sweet tooth like none other, while I am pretty blasé about ice cream and candy. Geez, we are such iconoclasts, with our non-gendered, non-American food preferences!

What is really interesting is the ways in which this reflects US veganism. As Shah says, “[W]hile it seems possible that some food preferences could be put down to gender, it’s obvious that American culture has a way of exacerbating them.” US vegans are often written off as a bunch of educated white chicks, and many of us are. The movement has a homogeneity problem, and I am so grateful for those who are actively challenging this. (Sistah Vegan and Vegans of Color immediately spring to mind, as does The Discerning Brute.) It can’t be simply that men like meat, while women like tofu. (Because really? No one likes tofu in its natural state.) I wonder what the vegan demographics look like in other countries. We’re working against culture, not merely genetics, and that makes a huge difference.

Thoughts on gendered food on this Friday before a long weekend filled with gluttony and pyrotechnics in the name of US independence?*


*I once heard it referred to (by a Brit) as “Good Riddance to Ungrateful Colonists Day.” I enjoyed that.
Posted by Vegan Burnout at 10:02 AM 5 comments: