Giving thanks for Poplar Spring.

I know I’ve said it dozens of times, but Poplar Spring Animal Sanctuary is one of my favorite places. Yes, it takes forever to get there (okay, 90 minutes) and we can’t make the drive as often as we’d like, but it is always worth it. So, despite the fact that I was still nursing a sniffle and Red had gotten off a plane the night before, we packed up some cornbread and drove down for the annual Thanksgiving with the Turkeys.

Since we were early, there was plenty of parking, but from what we saw later, that didn’t last long. According to Deb at Invisible Voices, who has the inside track on these things, as many as 800 people showed up! I totally agree with her that Poplar Spring should start marketing the day as the World’s Largest Vegan Potluck. It was wonderful to see so many people excited about the animals—and so many kids, too! 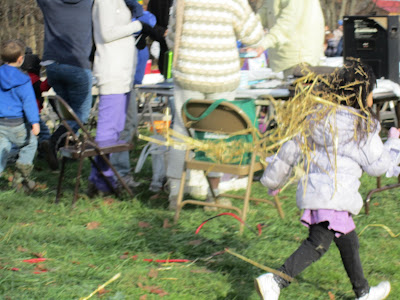 Her favorite game was dropping armfuls of straw on her head and running around.
But first, we had to pass this understated marvel of good taste to get there: 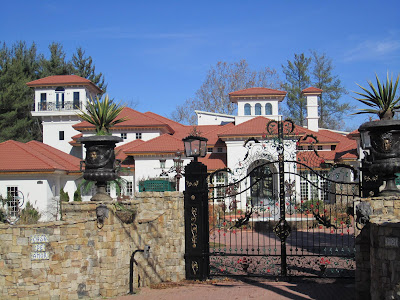 This is the Casa de Amor, and by all that’s holy, if it isn’t the trashiest mega-mansion in the entire county. The fountain is out of frame, but the Internet tells me it’s illuminated by rainbow lights at night. If you’ve ever been to Vegas and seen the fountain display at the Bellagio, that’s what I’m envisioning. There are also big-ass eagles atop the fence. It is truly a triumph of drug money or other unsavory enterprise.

Once we made it to the sanctuary, we checked in on our friends the goats: 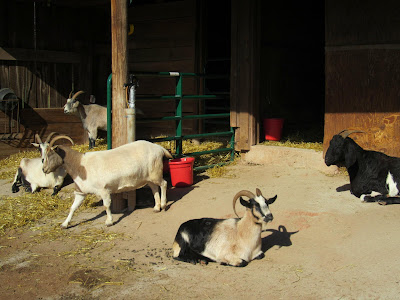 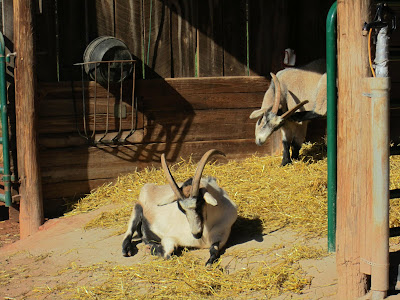 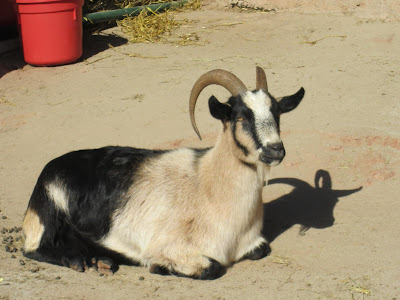 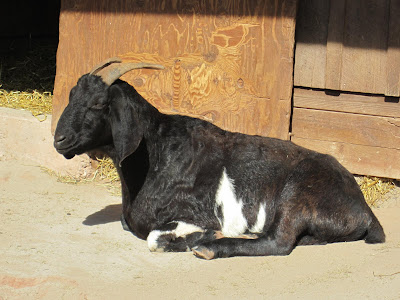 We then wandered down to the chicken yard to find Deb, but were distracted by this handsome fellow: 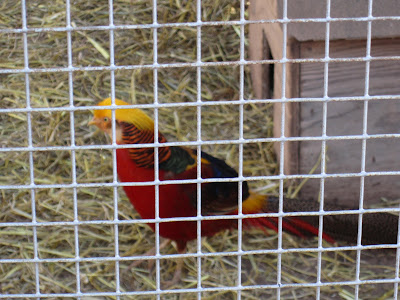 Would you believe he’s a pheasant? I always thought they’d be drab birds, meant to blend in with the forest. Not so, evidently, because he is as colorful as any tropical bird. Perhaps other varieties of pheasant are more sedately plumaged, but he is quite striking. I believe he’s a newcomer to the sanctuary, and I don’t doubt he’ll attract much attention.

Poplar Spring also recently welcomed two young turkeys, Tilly and Cosette (no promises as to who’s who, though Deb says that Cosette may be soon renamed something more appropriately masculine if suspicions prove correct): 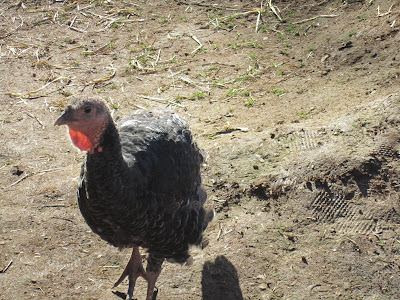 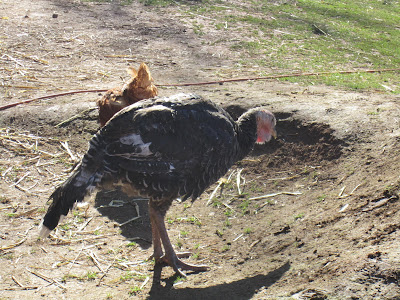 Edward or Arthur (I can’t tell them apart) spent a bit of time hollering in his distinctive peacock way, though I didn’t see either peacock strutting around with tail unfurled. It was nice of them to let the turkeys have center stage. 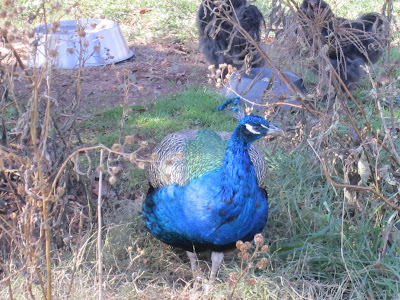 True to form, the rabbits kept to themselves in a cozy pile: 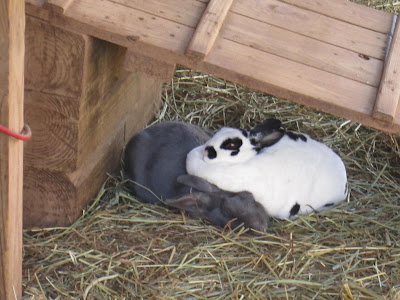 Allison and Twinkle don’t need much personal space.
Here’s lunchtime for the turkeys, who are always very excited to be the center of attention: 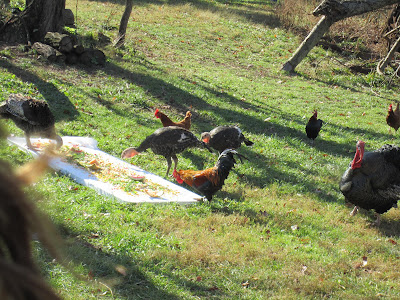 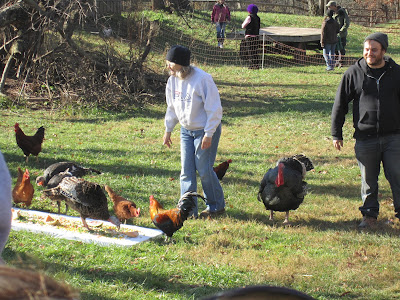 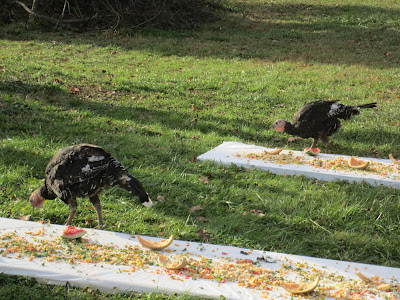 Cosette and Tilly went back for seconds.
Once the turkeys had their buffet, it was time for ours. Red’s and my strategy is to split up and hit different tables, so we can try as much food as possible. I think we did exceptionally well: 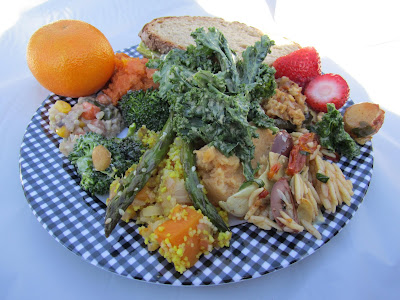 I grabbed those strawberries for Red, because I am the Best Wife Ever. 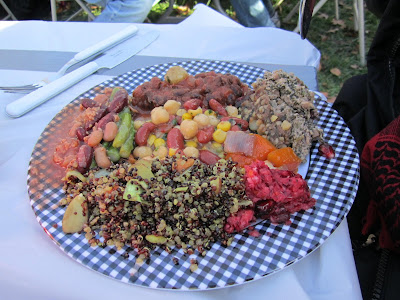 I did sneak off to the dessert table first and snag two pumpkin whoopie pies because I was sure they wouldn’t last. I was right; when I went back after snarfing my lunch, the desserts were pretty well decimated.

Here’s an example of how well matched Red and I are: We each spied a crate of clementines, and we each grabbed one for ourselves and one to share with the other. When we met up with our loot, we had four clementines! I would have felt greedy keeping all of them, so we gave two to our tablemates, one of whom worked for FARM. You were all lovely, tablemates. (Protip: Get to Poplar Spring early and drop your stuff at a table so you’re not sitting on the grass. This is the first year we figured out that trick.)

This year, the party had a surprise guest speaker: Will Tuttle, author of The World Peace Diet (which I own, but haven’t read, because you know how it is). It can be tough to rig up a good sound system outdoors, and I’m not sure everyone heard him, but he was well received and I hope he had a good time. 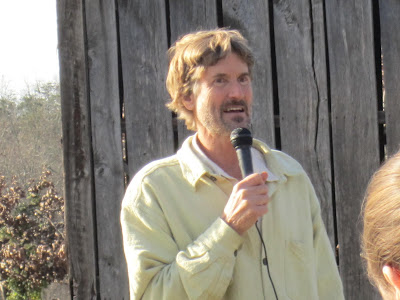 After lunch, we moseyed over to the pig yard: 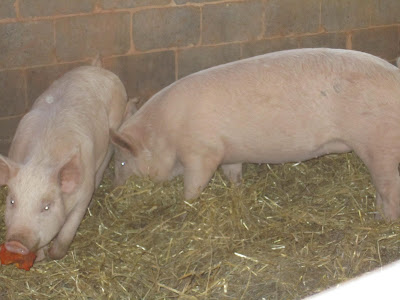 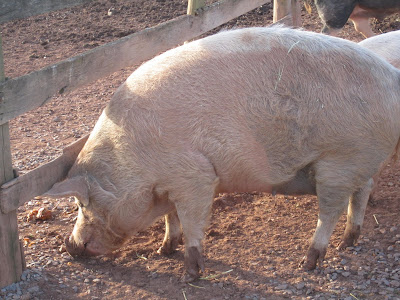 If you look closely, you can see Red back there! 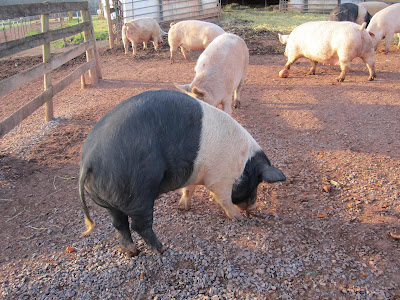 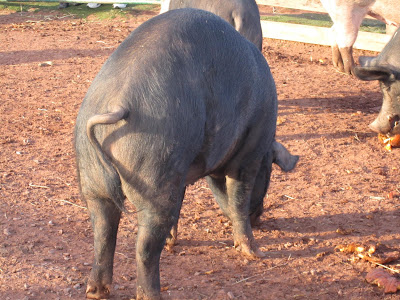 I couldn’t resist the ‘tock shot. 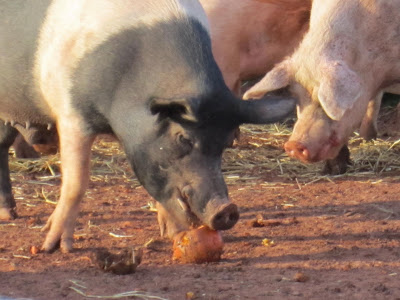 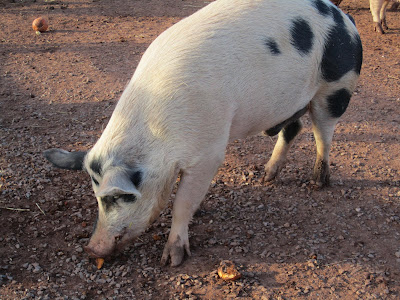 We needed to head home to Lucy, so we stopped by the gift shop for a new calendar (it’s almost January and I need to continue being That Person at work). Deb’s photos are beautiful and really capture the personality of each animal.

For all the beauty and joy of the day, I was saddened that Opal wasn’t there. Opal, grande dame of turkeys, passed on in April after kicking ass and taking names for seven spirited years. That’s a damn good run for a turkey who, like she was, was bred to be killed. She ran away from a slaughterhouse when she was just a youngster and came to Poplar Spring in 2004, after her kindhearted adopters realized that a sanctuary was the best place for her. Although her beak and toes were cut short and I’m sure this caused her pain (as well as made it difficult for her to walk and eat), she was unfailingly gentle and loved to be stroked. She was truly an inspiration and will be missed by so many, human and nonhuman alike. Opal and I at last year’s potluck.
Another year, another early Thanksgiving. I’m so grateful for places like Poplar Spring, where animals can not only live free from fear and pain and express their true natures, but where we humans can remember that we always have the opportunity to be better versions of ourselves.
Posted by Vegan Burnout at 2:19 PM 1 comment: Links to this post

I love you so much and I really wanted to get up a Thanksgiving with the Turkeys post today, but it is not happening. I have a plane to catch tomorrow morning and tonight I have a date with Mr. Gary Oldman. I am maybe exaggerating a little about that, but Red and I have tickets to an advance screening of Tinker, Tailor, Soldier, Spy at the AFI and Mr. Oldman is scheduled to be there so we are understandably just a little bit fucking stoked. I am totally not going to fangirl out over him if we should perchance to meet him, but I am really torn as to whether I like him more as Sid Vicious or Sirius Black. I think I’m leaning towards Sid. Discuss.

(We can then discuss my passion for his TTSS costar Benedict Cumberbatch. My mother thinks I have a screw loose but she has a mug that declares she’s saving herself for Tom Selleck, so I think the loose screw is a genetic problem.)

BACK ON TRACK, BURNOUT. Thanksgiving with the Turkeys was wonderful as always—Poplar Spring is, as I’ve said before, the happiest place on Earth, that Disney shit be damned. Red and I ate a bunch of delicious food, hung out with the lovely Deb, drove past the most ostentatiously grotesque house ever (or at least outside of California, where I imagine they have the market cornered on that sort of thing), and in general had an awesome time talking to people and meeting animals. After Thanksgiving, which will be spent in the bosom of family at my sister’s new place in North Carolina (re-read this if you want to see me drinking White Russians and making Big Lebowski jokes), I promise to do a full recap and catch up on the million other posts I owe you.

Have a wonderful Thanksgiving, and let your vegan freak flags fly.

love and snuggles,
v.b.
Posted by Vegan Burnout at 2:46 PM 2 comments: Links to this post

Labels: poplar spring, thanksgiving, this is not a real post

Here’s a quick Halloween/Samhain rundown for you, my pretties. It was on a Monday, which is a pretty blah day for a holiday, but we do what we can, yes? Since we didn’t have lots of time to prep, we kept our celebration short and sweet and very tasty. 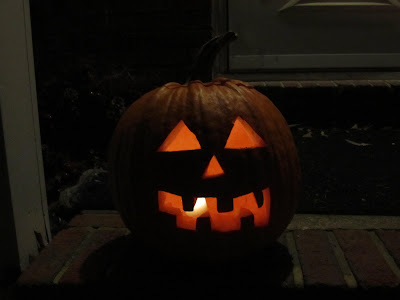 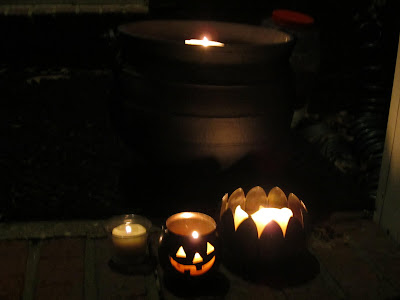 Like last year, we set up our candy-distributing station in the front yard, in front of our firepit. It wasn’t too chilly, and the fire kept us warm. I tried to toast a marshmallow, but the firepit’s screen made it tough and sticking my hand into the flames didn’t work out so well either. So my s’more was a little half-assed, but still tasty. In case you’re wondering, Bug Bites are the perfect size for s’mores, and they come with cute little insect cards inside!

Red and I have acquired quite a taste for mulled cider during the fall. I use the recipe in Kristin Madden’s Mabon: Celebrating the Autumn Equinox. It’s basically a bunch of pumpkin pie-type spices and some brown sugar, simmered with your cider or unfiltered apple juice. While we drank it straight on Samhain, it’s also very delicious with a slug of spiced rum (Sailor Jerry, represent!). 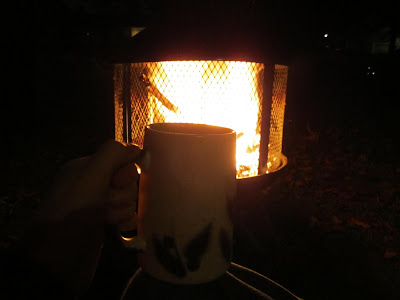 Here be cider.
In keeping with the theme of seasonal snacks, we nibbled on some pomegranate seeds. While Red and I seeded the pom (not as hard as you’d think), I told him the story of Persephone and why pomegranate seeds are an appropriate Samhain snack. I have an abiding love for Greek mythology thanks to this book, which was a very influential part of my childhood.

Here is a more fun version of that myth, which you should totally read. In fact, you should read everything on that blog, then come back here so we can geek out about it. Red doesn’t think it’s as funny as I do, but then again he did normal-kid stuff, not hole up in his room reading about satyrs and centaurs and Zeus transforming himself into animals so he could get his freak on. 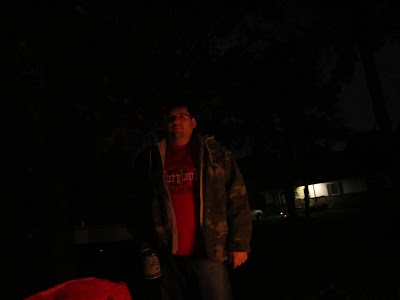 He is not thinking of turning into a swan in order to get into my pants.
Um, yeah, and we gave out candy, then went to sleep.

Final CSA roundups coming soon! (Soon being relative in blog-time, but you know.) Plus, this weekend is Thanksgiving with the Turkeys at Poplar Spring, so there will be epic awesomeness afoot. Kisses! 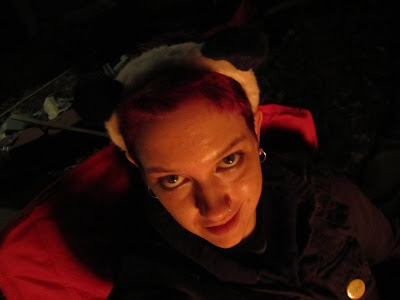 If it’s a day that ends in y, I’m probably wearing the panda ears.
Posted by Vegan Burnout at 5:02 PM 3 comments: Links to this post