Yes, beloveds, we have stepped once more unto the breach of local veggies and have purchased a share in One Straw Farm’s harvest! These roundups will probably be shorter than last year’s (did you actually read those? Good for you!) because we’re doing a half-share instead of a full one. Like I told you at the conclusion of 2010’s CSA, a full share occasionally left us with unused and deeply unloved produce (fuck off and die, endless heads of lettuce). As an added bonus, our pickup site is the 32nd Street Market, so a half-share gives us room to browse other vendors and pick up extra produce that looks good without feeling overwhelmed or wasteful. The farmer’s market on a Saturday morning is chaos itself, but we like it. (Actually, we did not like this week’s experience at all, but you have to wait for that story.) 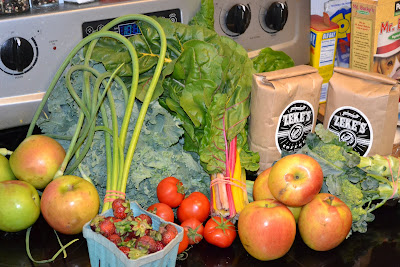 The garlic scapes, chard, broccoli, and kale are all from One Straw. The best part of the half-share is that we can choose our veggies, so we left all the lettuce behind. The strawberries were a little present they were giving out, and they were much appreciated! They were very small, but tasty. Red reports that they were delicious frozen. We also picked up some local apples (I am trying to love them, but it’s hard when I’m hooked on really tart, crunchy Granny Smiths), tomatoes, and coffee from Zeke’s, which is a Baltimore roastery. They have fair-trade!

So, what did we do with this stuff? I don’t have any pics of the broccoli, because Red sautéed it to perfection and you all know what sautéed broccoli looks like. I tell you what, my man can work a skillet. He also sautéed the kale with garlic, and we ate that with Veganomicon’s chard-rice-chickpeas extravaganza (you probably think I make that twice a month, and some months you are not far wrong). 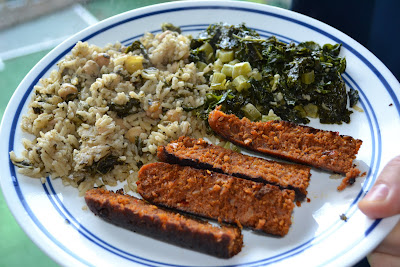 Because Red was curious, we tried Field Roast’s Mexican Chipotle sausage. Kids, it is SPICY. I gave it one bite and nudged it off the plate and into a storage container for Red to eat later. However, I can report that diced small and added to a tofu scramble, it sort of redeems itself. Also, as we cooked it, we both succumbed to a wicked coughing fit. I don’t know what’s in it that’s released into the air when it hits the pan, but we ingested it.

In happier recipe news, our garlic scapes and tomatoes ended up in this salad: 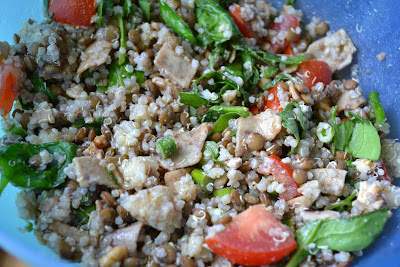 This is a take on a salad from Barbara Lauterbach’s Pasta Salad: 50 Favorite Recipes. The book is totally not vegan and I have no idea where I got it from, but it has a few recipes that I’ve tweaked and fallen in love with. This one calls for couscous, but I subbed quinoa this time for a bigger protein punch. I subbed the garlic scapes for the scallions and garlic, and you should always feel free to do that, because it works out great. I had some leftover spinach from something pre-CSA, so that’s in there too. Also, pine nuts are freakin’ pricey, so I always use walnuts in this salad. It keeps well and you’ll be nomming on it for a week.

It is also entirely possible that we had spaghetti during the week. That’s our go-to “oh shit, we didn’t buy enough food” meal, and it does not bode well that I can’t remember if we’re already at that stage of CSA-dom. Whatever, spaghetti’s never wrong.
Posted by Vegan Burnout at 11:31 AM No comments: Links to this post

Stoner salad, fit for a Burnout.

Recently, I made the yummiest thing, courtesy of the most adorable new blog: 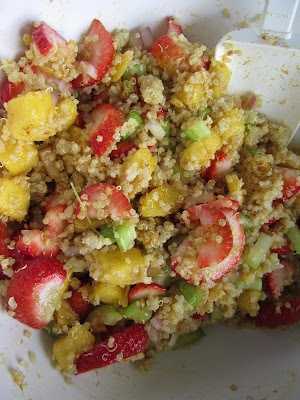 That is Mango Quinoa Salad, and it is from The Vegan Stoner, surely the cutest website that does not include photos of baby animals. Seriously, take a peek at the little labels on the drawings! It’s like a scavenger hunt of whimsy.

[Just a note: Before you go making all sorts of punny observations about the stoner-burnout thing, kind of like I did right at the top of this post, let me state for the record that I’m not that kind of burnout. Not that I care if you are, or if your neighbor is, just saying. We’re all adults here. Like I need help getting the munchies, anyway.]

So! This salad! Once I saw the picture, I knew I had to make it. “Handful of quinoa” was a little vague for me, since in my experience, proportions actually matter when cooking grains, so I went with a half-cup. This was a good call. Also, I am not usually into celery and raw onions, even in salad and even when they’re red onions, which are pretty much the most inoffensive member of the onion clan. But I sucked it up and diced those babies, tried not to eat all the mango and strawberries before I could get the salad together, and broke out the mixing bowl. Let me tell you that the celery and onions are a perfect vegetable counterpoint to the sweetness of the fruit, so you shouldn’t skip them, even if, like me, you’re weird about certain veggies. Curry and a sprinkle of salt is all the seasoning you need, although I did add a drizzle of olive oil because it’s healthy and delicious. And with that, The Vegan Stoner has my loyalty, because this is the perfect summery salad.

I am the queen of cupcakes. Or at least the duchess.

So I made my first-ever cupcakes over the weekend. I am pretty sure they were my first cupcakes, and if they weren’t, they were most definitely my first vegan cupcakes. I used to be scared as hell of cupcakes because they are so dainty and precious and nicely decorated, not like cookies that you can plop onto a pan and if they’re lumpy, you can say they have character and if no one likes them, it’s their loss. No more! Now I am all, “Bring it on, cupcakes! I can take you.”

Backstory: My parents had a Memorial Day cookout with various neighbors and family members, and my sister and her lover-man were visiting, so it was kind of an occasion. I asked my mom what to bring, and she whipped out the Tiramisu Cupcakes recipe from Vegan Cupcakes Take Over the World (she found it online—my mom is awesome, but not yet awesome enough to have her own vegan cookbook collection). I was like, “Really, woman? Those are some involved cupcakes.” So we compromised. I baked the cupcakes and made all the fixings, and we gutted/filled/frosted/decorated them together. That way, if they sucked, I only had to take half the blame. Red took pictures: 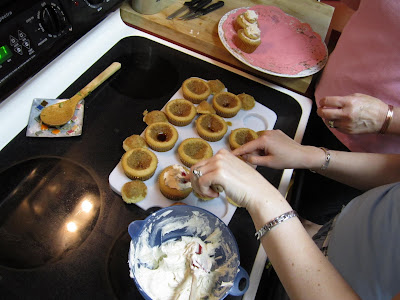 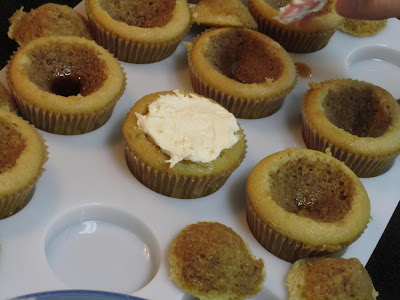 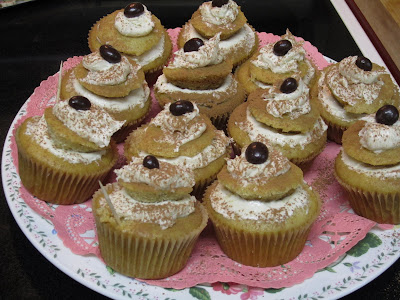 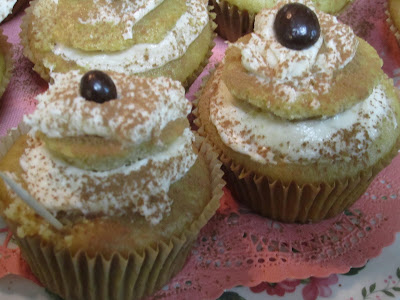 When we were finished, I was amazed by how good they looked. I was expecting some malformed, poorly frosted cupcakes, and they came out beautifully. I couldn’t wait to try one.

You will not be shocked to learn that they were ROCKIN’. These are epic cupcakes, y’all. They are sweet and boozy and filled with delicious cream cheese frosting. It was well worth the time we spent delicately hollowing them out, soaking them with Kahlua, and carefully placing those chocolate-covered espresso beans on top. Afterward, I wanted to fall asleep on a bed of clouds and dream of dancing biscotti while a choir of baby angels sang opera. I am a cupcake convert.

However! My dessert adventure was not over. As I was baking the cupcakes (this is the day before the filling/decorating extravaganza, in case you are creating a timeline of my exploits), I began to worry that guests would outnumber cupcakes and called my mom to ask her opinion on this important mathematical problem. She suggested that if I wanted to make something extra, I should go for it. As I like to show off the delights of vegan desserts, I made Caramel Walnut Bars from Vegan Cookies Invade Your Cookie Jar (they are supposed to have pecans, but I had a huge jar of walnuts and no pecans, so you know). Props to Red for making a crucial brown sugar run mid-project. They were much easier than the cupcakes, for which I was grateful, but no less decadent. 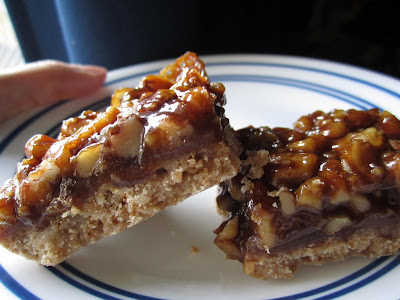 Two words can sum up these babies: SUGAR. BOMB. Holy tooth decay, that caramel is some serious stuff. Serious and awesome. (And of course all the walnuts = healthy, so you can have two!) Several minutes after I crushed a cupcake and one of those bars, all the sugar plowed through my brain and I spent the rest of the night bouncing around like I haven’t done since high school. Good thing I’d already done yoga.

So, to sum up: Dessert was a success (so was dinner because my mom made this pasta salad), cupcakes no longer intimidate me, and my dental hygienist will have her work cut out for her at my next visit.
Posted by Vegan Burnout at 2:38 PM 6 comments: Links to this post