So, when we last parted, Red and I were sleeping off our jetlag in the beautiful but chilly city of . The next morning, I had a muffin for breakfast (maybe coffee too? I managed to keep it to once a day despite the Starbucks in the lobby), kissed Red goodbye as he headed to work, then wandered down the street to the Contemporary Jewish Museum. I have an honorary Jewish grandma who is totally awesome, and she wanted me to go there and send her a postcard. I was happy to find such a cool museum within walking distance. I learned a ton, too. Plus, where else are you going to find an exhibit called Black Sabbath? It was in this amazing room called the Yud Gallery, which is filled with diamond-shaped windows. The light was incredible. Really, the whole place is fascinating from an architectural perspective as well as religious and historical ones. Take a look! 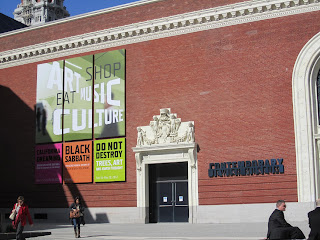 Lunch, glorious lunch. We had the fortune (good or bad, you decide) to be just down the block from a mall. I am apathetic toward malls on my best day, but this mall had a Loving Hut in the food court. Now, I’ve spent enough time as an Internet-savvy vegan to know that Loving Hut elicits strong opinions (I first read about it in VegNews; if that link doesn’t work, try this),but I wanted to experience the weirdness for myself. Anyway, Red and his coworker met me for lunch. Red had, I think, the Grilled Philly Sandwich and I had a bowl of Loving Hut Noodle Soup. Both were good, especially considering the fate of vegans at most food courts. Well played, Supreme Master. 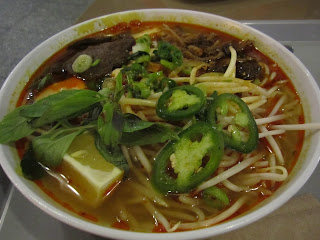 After lunch, I may have walked around a little more, or I may have just chilled out until Red finished work and we went to the MOMA. Damn, you guys, I love a good MOMA. Not as much as Red does, though. My boy is all about his modern art. Check it, he even found Waldo: 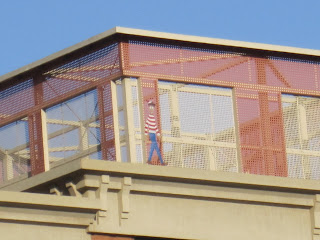 Exploded Views by Jim Campbell in the lobby. The photo absolutely does not do it justice: 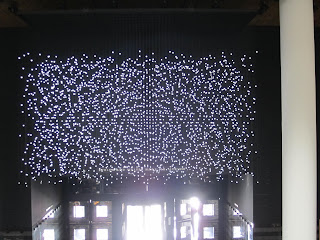 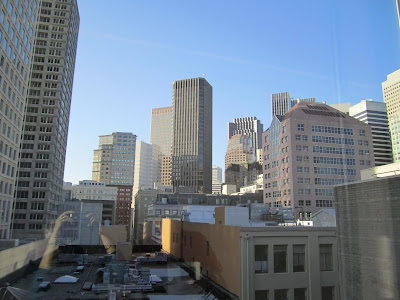 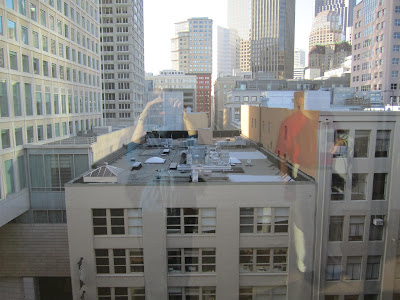 Then we were hungry and didn’t feel like wandering far for food on our first full day in the city. This laziness took us to Samovar, and it was kind of the low point of the trip. Hell, at least we punched that ticket early. It wasn’t bad, for sure, but it wasn’t what we expected, either. It was cramped and noisy and expensive. It’s nice that you can order a “tea service” meal, which is a themed pairing of food and tea. It’s not nice when the tea tastes like feet and you’re afraid to ask for sugar because they obviously frown on that sort of thing, but you damn well drink every drop because you threw down a for it. If you’re still interested, I had the Chinese Service (to be fair, the food was good) and Red had the veganized Paleolithic Service, which was rather on the bland side. 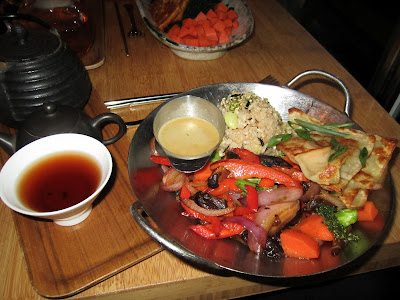 The teapots were charming, though.
Note: Weird spacing and wonky photo alignment brought to you by Blogger’s new interface. Thanks, Supreme Master Google.
Posted by Vegan Burnout at 3:41 PM 3 comments:

There are many perks of being married to my husband, but one of the most interesting is that I frequently get to tag along when his job takes him to new cities. Some I can’t join in on (I wasn’t sad to miss Middle of Nowhere, Georgia, especially because I got to stuff my face with popcorn and watch Scarface and then Red came home a day early to surprise me on my birthday), but so far I’ve been able to experience Chicago, Orlando, and now San Francisco. The best is when he’s free to wander the city with me, but even on my own, it’s still great.

I was especially psyched for San Francisco because I have friends there. Friends! The best part of any new city! I wouldn’t have to figure it all out for myself! I had ready-made tour guides waiting to feed and entertain me. On top of that, San Francisco is fantastically vegan-friendly, so I didn’t feel pressured to schedule every snack and meal. (All the same, we bought a guidebook and I printed VegNews’ list of top eats in the Mission.) We still packed trail mix and bars and little things like that to sustain us, and for breakfast, I baked up Vegan Brunch’s Cocoa-Raspberry Muffins (with bonus chocolate chips, because you have to) and Lemon Poppy Seed Muffins. They survived our first flight in fine style but several were smashed in the overhead bin during the second. Damn, muffins. They were still delicious, though.

Travel days are almost always a waste, so there’s not much to talk about there. Our first flight was half-empty, which meant that not only was I able to stretch out and snooze with my head in Red’s lap (he is an excellent pillow, in case you were wondering), I could have had an entire row all. to. myself. I know, right? When was the last time you weren’t jam-packed into an airplane?

On our second flight, I was sandwiched between Red and a gentleman who was headed to Santa Cruz on business, that business being a medical marijuana dispensary. This conversation served basically to prepare us for the hella amount of weed we would run into in San Francisco. As I’ve said before, I don’t care one way or the other, but it was profoundly odd to be walking down the street and get a massive secondhand hit. I wasn’t sure whether to be grateful or bothered, so I mostly settled for amiably confused.

By the time we got to our hotel, it was about 2pm California time, which meant our stomachs thought we were just about due for dinner. Red had eaten less than I had during our flights, so he was fading fast. Friends to the rescue! I hit up my girl B, writer, ecofeminist vegan, and recent San Francisco transplant, and she and her man scooped us up in their pimp ride and got us fed at the St. Francis Fountain and Diner. I was super-excited to finally meet them in person. (If I offended anyone with my use of the world “pimp,” you were probably overdue for it if you’ve been reading the blog for any length of time. Plus, that car deserved a mention.)

I didn’t get a picture of him, but while we waited for our table, we had the chance to snorgle an adorable blue pit bull puppy as he and his person tried to go for a walk. I say “tried” because it was clear they couldn’t get more than a few steps before being accosted by loving strangers wanting to nom on his silky baby ears. Red and I missed Lucy already, so it was nice to get a little taste of pibble love on our first day away from her.
We also got in some good hipster-watching. Left Coast, I treasure you.

Then! Food! I chowed down on the Vegan Thing, which is a pile of home fries, Daiya, guacamole, scallions, and salsa. It is assuredly not good for you, but it is very very delicious and it hit the motherloving spot after our long-ass day. I managed to stop at half so I could walk back to the car, but it was tough. Red enjoyed a Devil Burger, which involves grilled onions and seitan (two of his favorite things), so he was pleased. 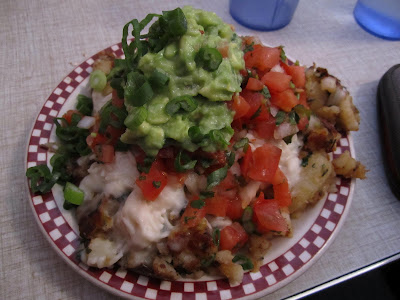 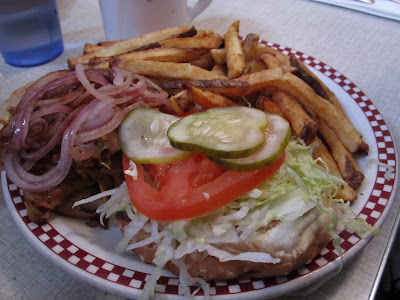 After that, our awesome friends dropped us off at our hotel so we could pass out and let our body clocks reset. Thanks, awesome friends!
Posted by Vegan Burnout at 3:25 PM 2 comments:

Slinking back into the sunlight….

Truly, I’m not sure how I’ve neglected my poor little blog for over four months. Even worse, I’ve neglected you, darling readers. I would offer amusing pictures of animals talking in all-caps and beg for forgiveness, but I don’t deserve it.

The worst part is…

I kind of didn’t miss blogging.

There. I said it. I got swept up in holiday silliness (and seriousness), enjoyed not having to remember to take pictures of my food, and just plain slacked off. No major crisis precipitated any of this; I just let life get the better of me. I had yoga trainings and work trainings and my blog reader kept filling up and overwhelming me and then my favorite coworker left (that lucky bastard) so I had his work to do too and I just got so tired. So tie-tie, even. I think I spent whole days mindlessly playing Bejeweled.

And then I started feeling like I didn’t really have anything to add to the conversation anymore, since my photos generally blow (and isn’t that what people come to food blogs for?) and the vegan blogosphere has totally expanded to include, like, three unknown galaxies of awesomeness. I mean, I know my awesomeness is its very own inimitable brand, but even the knowledge of my own special-snowflake specialness wasn’t enough to drag me back to the keyboard.

But I am going to honest-to-Goddess try to get myself back on a regular posting schedule.

First up: Red’s and my adventures in San Francisco. It wasn’t warm, it wasn’t sunny, but it was sure as hell delicious.

In the meantime, here’s a picture of me doing yoga. My hair’s not pink at the moment, but don’t worry, it will be again. Or maybe blue or green. 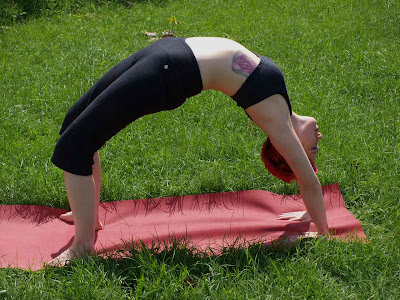 I love you all like whoa.
Posted by Vegan Burnout at 2:41 PM 4 comments: