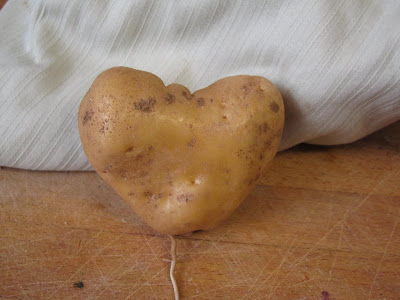 A heart potato! We really felt the love from One Straw. Thanks, you guys.

We also got some tomatillos. “What are we going to do with these?” I asked Red, who had done the marketing solo that morning. (I had gone to aerial yoga class, which is a ridiculous amount of fun.)

“Use them to make tomatillo sauce,” he suggested.

“Uh, like the jar we already have in the freezer?” I asked, pulling it out to show him. I think I made him feel bad, so I quickly decided that we would use the tomatillos, together with the potatoes and our cute little Lodi apples, to make Veganomicon’s Manzana Chili Verde: 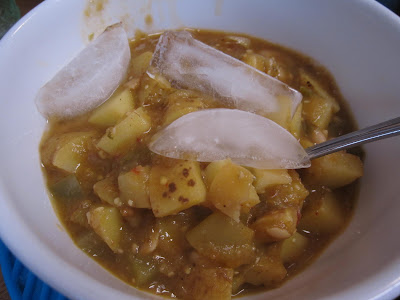 It’s never too hot outside for this chili, which is an automatic success with anyone you love. Well, I guess it was too hot for Red, because he added some ice cubes. His internal thermostat is set so differently from mine. It never ceases to amaze me. Anyway, this chili is delicious and I can’t recommend it enough.

Here’s a picture of a pita pizza, though I can’t remember where the spinach and tomatoes came from. One thing’s for sure—toaster-oven pita pizza is where it’s at if you want a quick one-person dinner. 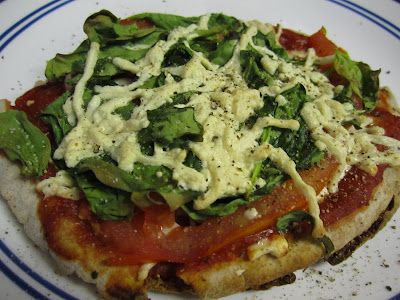 I don’t remember where we got this squash, but it wasn’t from the CSA. Anyway, we sautéed it with some dill and olive oil, then had it with quinoa for a light but surprisingly hearty dinner: 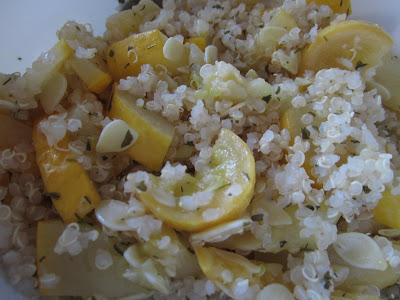 This photo should hopefully make up for the one I missed: 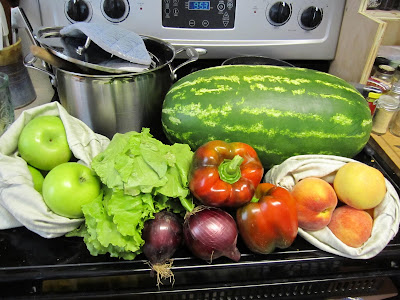 No, really, look at them: 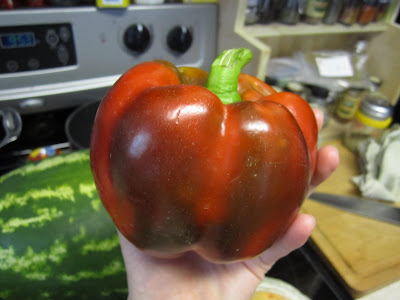 Have you ever seen a more beautiful pepper? My camera couldn’t do it justice. It’s a lush red color with shades of deep green, like someone painted it. Prettiest freaking pepper I’ve ever seen. I couldn’t bear to part with them, so it’s been only this week that one has met its destiny in this frittata I sort of ghettoed up: 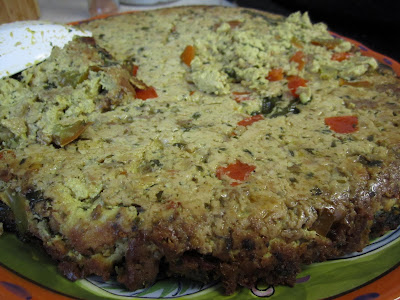 I was feeling too lazy to follow the instructions, so I sort of just winged the bits I didn’t want to do. I was really psyched to add a bit of spinach, too, only to find out I’d left it on the counter for three days. In my defense, it was in one of our pillowcase produce bags, and spinach is so light and fluffy, I thought the bag was empty. Who am I kidding, I sniffed that wilted spinach and it smelled fine, so I chopped it up and threw it in the frittata anyway.

Red was over the moon for that watermelon. He loves it like whoa, and as you can imagine, this beast gave us a ton of fruit. We gave half to his parents and had pounds of it left over. Delicious, messy, sweet watermelon, you are summer itself.

Those peaches were pretty fantastic, but the apples were the star this week on account of their name: RAMBO. Rambo apples! For real! How could we not buy them, after that? They are similar to Granny Smiths, and a little firmer and tarter than the Lodis. Excellent eating apples. 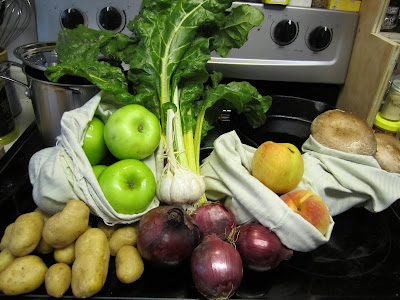 This was just last Saturday. We’ve still got the potatoes, but I think we’re going to make a hash out of them and throw in the stems from those portabellas. Suddenly I can’t remember if we got those shrooms from another vendor at the market or from the hippie grocery. I’m losing it.

The chard went into that rice-chard-chickpea thing from Veganomicon that I make all the damn time. I haven’t made it since Week 1, actually, so I was overdue. I didn’t take a picture because you’re probably sick of seeing it, and you should make it yourself because it will rock your face off.

We ended up with a ton of tomatoes, most of which were from family. We made a great quick spaghetti sauce (we riff on 30-Minute Vegan’s recipe), then turned to bruschetta (also 30-Minute Vegan). We had quite the Mediterranean dinner the other night: bruschetta with artichoke hearts and two different kinds of olives. It was decadent. 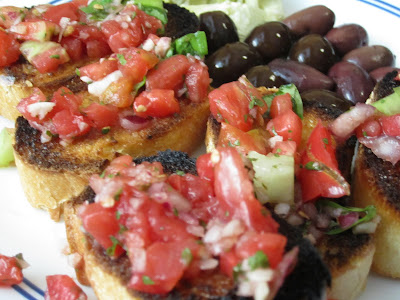 And that’s it. I know I promised you an ice cream post, and I’ll do it, I swear! Just…not today. But it’ll be worth the wait. Dessert always is.

Like I told you last time, I forgot to take a picture of Week 5’s veggies, but I do know that we got kale, and that Red once again made Adam’s Kale Salad with it. I remember this mostly because he hit the Bragg’s a little too hard while whipping up the dressing, so it was a touch salty. Mouth-puckeringly so. Still, it was kale. Salty, overdressed kale beats no kale any day of the week.

God only knows what else we had that week. Whatever it was, we ate it and it was good.

Here’s Week 6, which should look beautiful to you after the picture-free-fabulousness of Week 5: 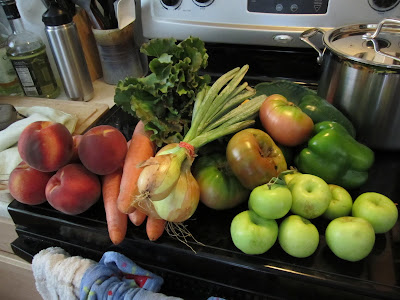 The red lettuce, peppers, and onions came from One Straw, and I’m pretty sure the tomatoes did too. Those were great tomatoes, and I am not a tomato-lover. We made many a tasty sandwich with them. We ate a lot of hummus with those peppers, too. It’s been too damn hot to turn the stove on very often, I tell you what.

More Lodi apples. Mmmm. I think. They could be Pristines, about which I will tell you in a minute. And don’t those peaches look amazing? They were, but the bastards wouldn’t slice. I could not split one in half to save my life. The halves simply would not twist apart. It made for some messy peach-eating. 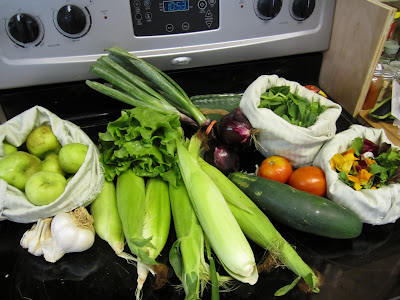 Corn! Glorious corn! Red and I love local corn, and this was the first week that One Straw had it. There’s no picture, because we just boiled it and ate it, like you do. Rest assured, it was delicious, and I flossed after. We also picked up the lettuce, garlic, and onions at One Straw.

You see those tiny little two-bite apples? They are everywhere recently, like Lodi apples 2.0. They are called Pristines, and they are very small and green. We tend to buy twice as many, because we estimate that two of them equal one regular-sized apple. I find their size kind of annoying actually, because I could easily chomp right through one if I wasn’t paying attention. Still, they’re tasty.

Lots of greens! My mom wanted some mesclun greens, but not a whole lot, so we split a bag. It feels so fun to eat flowers, doesn’t it? So I made a couple small salads that I didn’t bother photographing, but they did the job. We still have some spinach, and it is delicious. Mmmmm, baby spinach. The only kind of baby to eat. (Okay, baby corn counts too.)

Though not strictly CSA-inclusive, here is a pizza we made with zucchini a friend gave me: 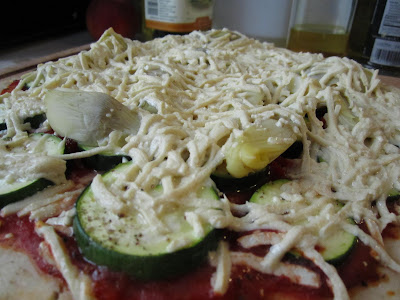 Red was inspired by this Vegansaurus pic, and I am so glad, because it was delicious. We already had the zukes and the artichoke hearts, so we scored some Daiya and a crust and went to town. Zucchini pizza FTW.

Did I tell you we got an ice cream maker? Hooooo boy, when I get some time to write that up, you’re gonna drool like whoa. For now, content yourselves with Fuck Yeah Vegan Ice Cream.
Posted by Vegan Burnout at 2:23 PM 4 comments: Links to this post